We filed our first annual report for the LLC with the state this week. That was a reminder that we have been at this for a year now. Brown Dog Press is sort of a business. Actually it is more of a hobby. We come to it when there is time available away from our day-to-day work/life/business. The Covid 19 shutdown has given us time. Work on our projects is progressing with the books we hope to get out. We are now the proud owners of 100 ISBNs. Our creative director is finalizing the copy editing and layout of an obscure pamphlet from 1866 on Eau de Mélisse. The translation to English from French is completed. We have relevant illustrations from the same time as well as an article form another source that is contemporaneous to the pamphlet. All of this is being put together in the hope it will find its audience. 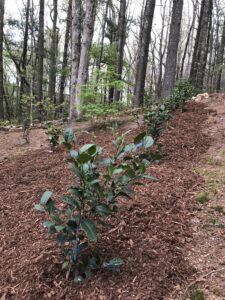 In February, Christine Parks from Camilla Forest Nursery in Carrboro NC (central NC, near Chapel Hill and Raleigh) spoke at Dobra Tea here in Asheville about growing your own tea plants. We know a little about the tea growing history around Charleston SC. We had not thought much about growing tea in the mountains because our climate is different from the coastal areas. Numerous plants (including several we tried) that grow in SC won’t survive in the mountains. This past summer we had brought back three smaller plants from her nursery.

The work is occurring at the start of spring. The Covid crisis and lock down has hit at a time when being outside is a blessing. There is time to be out in the yard now that there is less time at work. Like fertile soil, a fertile mind can bloom with the time is right. After clearing out several years’ worth of leaves and debris that had collected on the hill that is our backyard, an idea formed.

Those were set out last fall in beds close to the house. They survived the winter although one does look a little rough. During her talk Christine mentioned a man in Black Mountain who has grown and made tea for many years. He is just a few miles from us. That information was rattling around our brains when the hill behind our house revealed itself from under the debris. It is actually quite a lovely space. The site is well-drained (check), there are acid-loving wild blueberries already growing on it (check), it gets some sun but also some shade (check).The chance for winter cold damage to the plants was the only thing that concerned us. Camellia Forest has several cold hardy varieties – some from Sochi, Russia (Winter Olympics 2014) and others from the mountain areas of China and Korea. The neatest variety was one discovered growing near the demilitarized zone separating North and South Korea. Opportunity and time came together. We sent the nursery our order on a Wednesday and the plants arrived on a Friday. The work for this kind of project is digging the holes for each plant. We did that on the Wednesday the order was confirmed. That made the arrival of the plants more fun – we just set the plants in the pre-dug holes and watered them. A small tea garden was created. 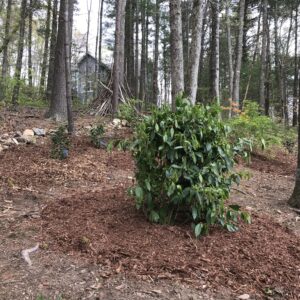 We set out a total of ten plants, 2 each of 5 different varieties. There is room for several more. We sent word to a friend in South Carolina to ask about a more mature plant grown from a cutting taken from a tea plant in Charleston. The plant was grown from a cutting taken from a plant from the Charleston SC area that was part of a failed tea growing operation established over 100 years ago. We love the old stuff here at the Brown Dog. The couple with the plant are older and were happy to pass it on to a new home. We retrieved the plant and set it out among our younger new plantings. The transfer has been a little tough on the bush but it is hanging in there. More about that plant in future postings.