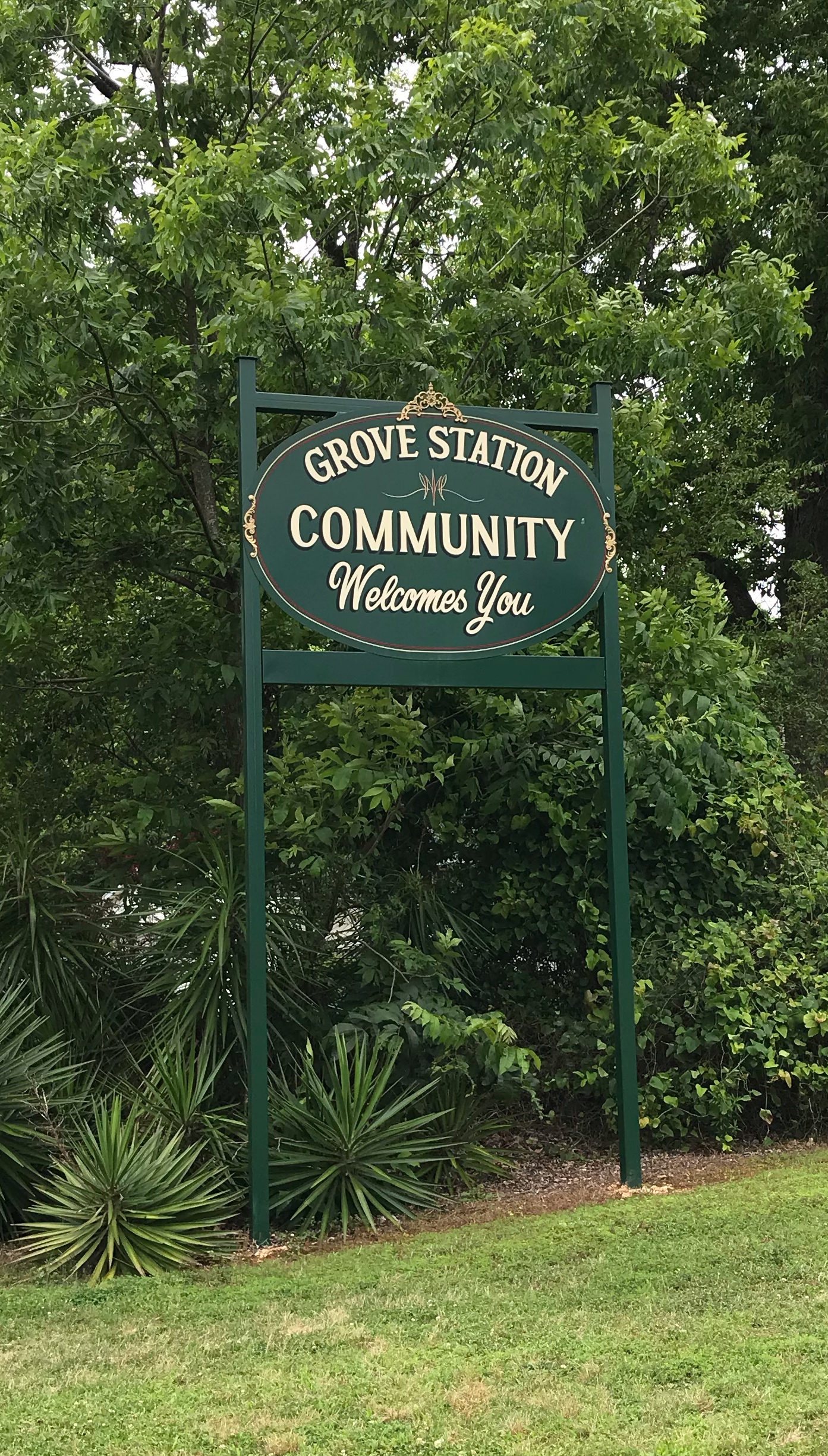 At latitude 35o the Brown Dog lies just north of upstate South Carolina. That puts us slightly north of Chinese tea growing areas that fall around the 30th parallel. Not something 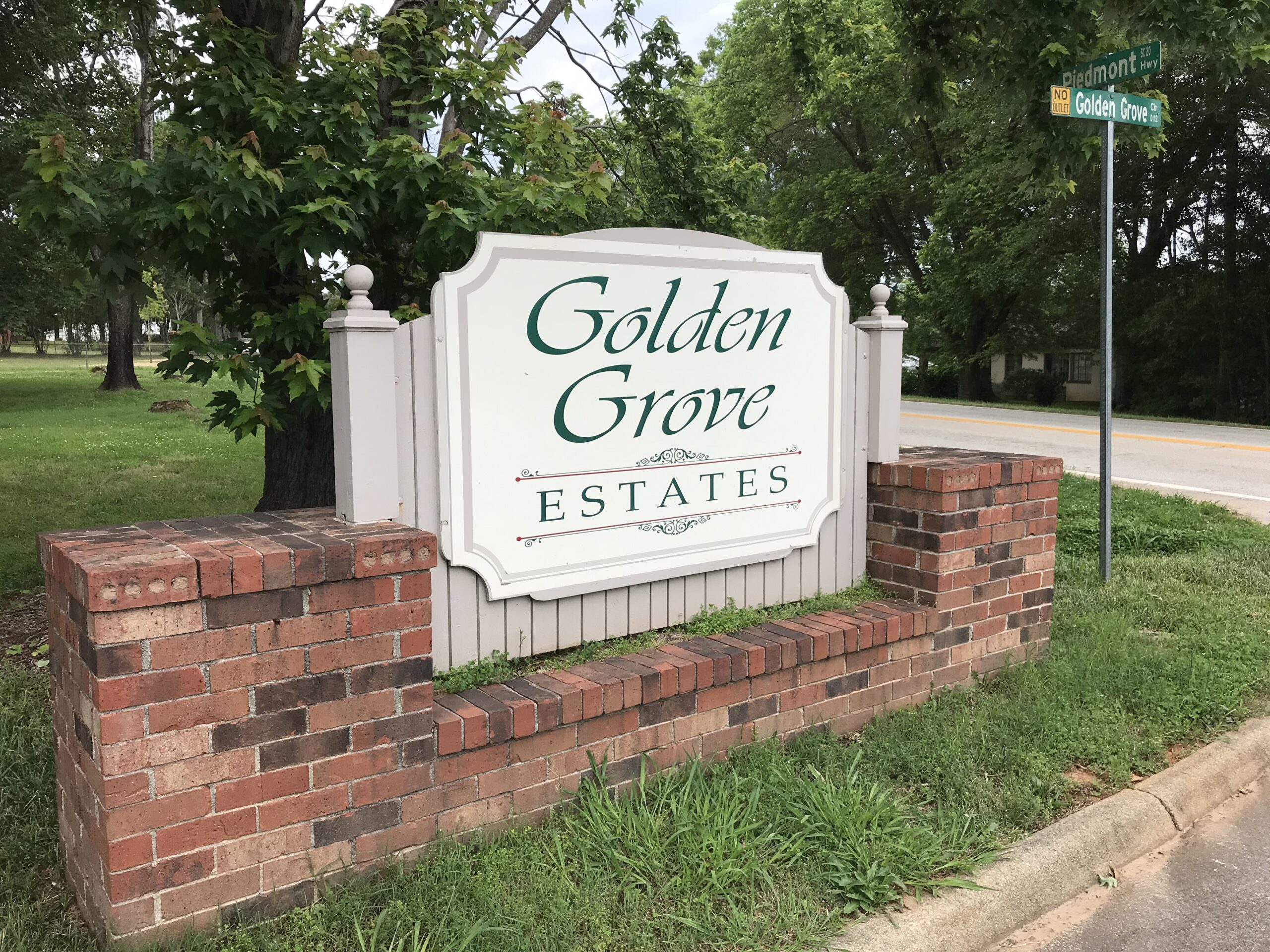 you think about most days. However, that observation was made by nineteenth century American farmers and used to promote the idea that tea (Camelia sinesis) would flourish in the southern United States.

Several attempts were made to act on that observation. The first was in an area just south of Greenville, SC in the Golden Grove community. After publishing his research into tea growing, Junius Smith purchased land along the banks of the Saluda River in Greenville County and begin planting in 1848. His plants were grown from seeds sent from India by his daughter who lived there with her husband while he served in the English military. Dr. Smith sent updates on his undertaking to newspapers, agricultural journals and the Department of Agriculture. His goals were modest. By this point in his life he was a widower and had been dealt a financial setback when his London England based steam ship transport company had failed. He did not intend to produce tea for consumption, but hoped to establish a source for tea seeds that others could use to set up their own growing operations.  His project was cut short when he was attacked in his home and died shortly afterwards in 1853. The attack may have been prompted by his anti-slavery views in antebellum South Carolina. After his death, the farm and his equipment were sold off. We have heard that tea plants are still present in the area of Dr. Smith’s farm, but we have not had the time to investigate.

The next attempt at tea cultivation in the United States was made in Riceville, GA slightly south of Savannah. These plantings were established by an Englishman who had worked on tea plantations in India. His plantings were abandoned after he was 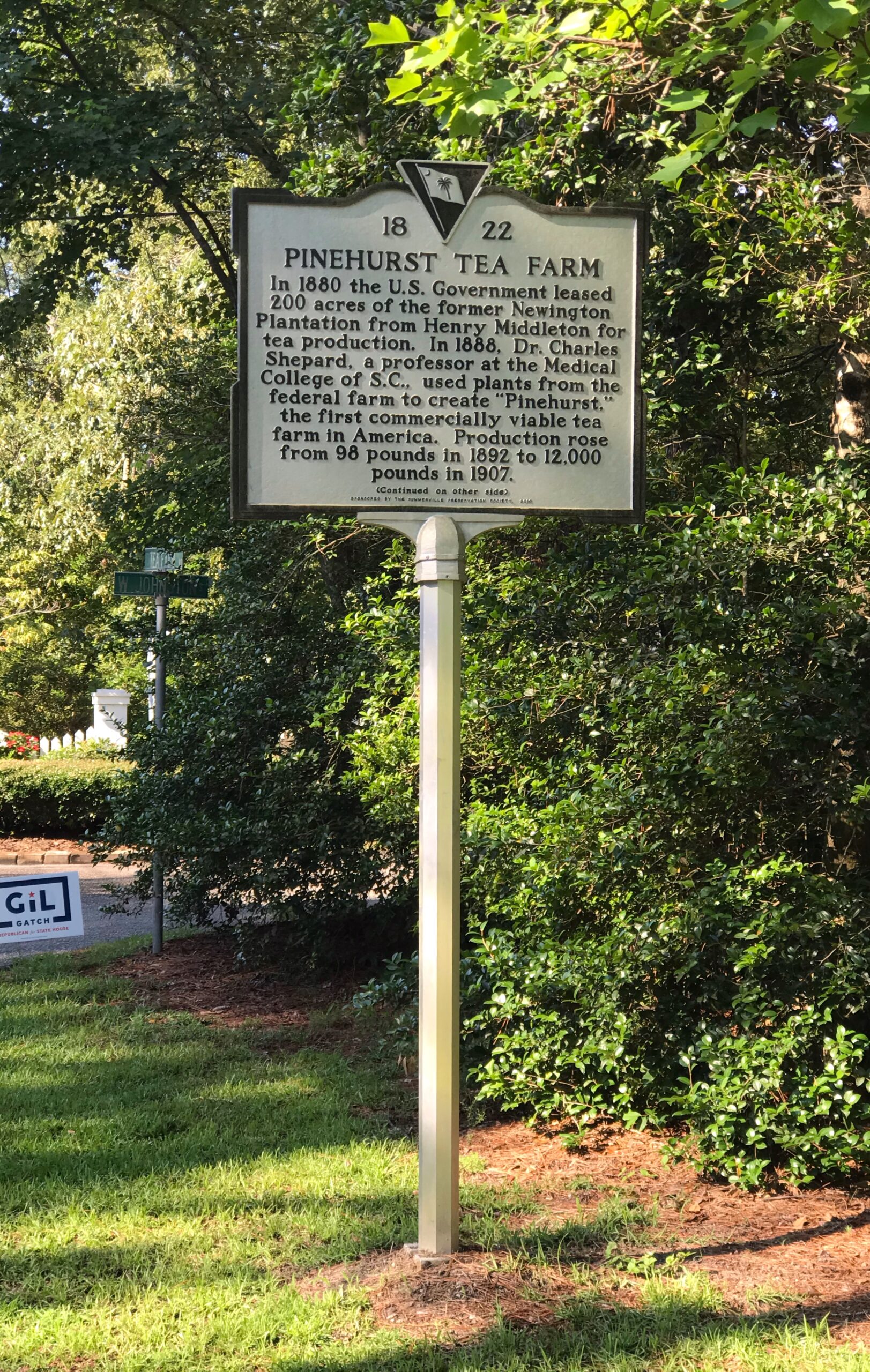 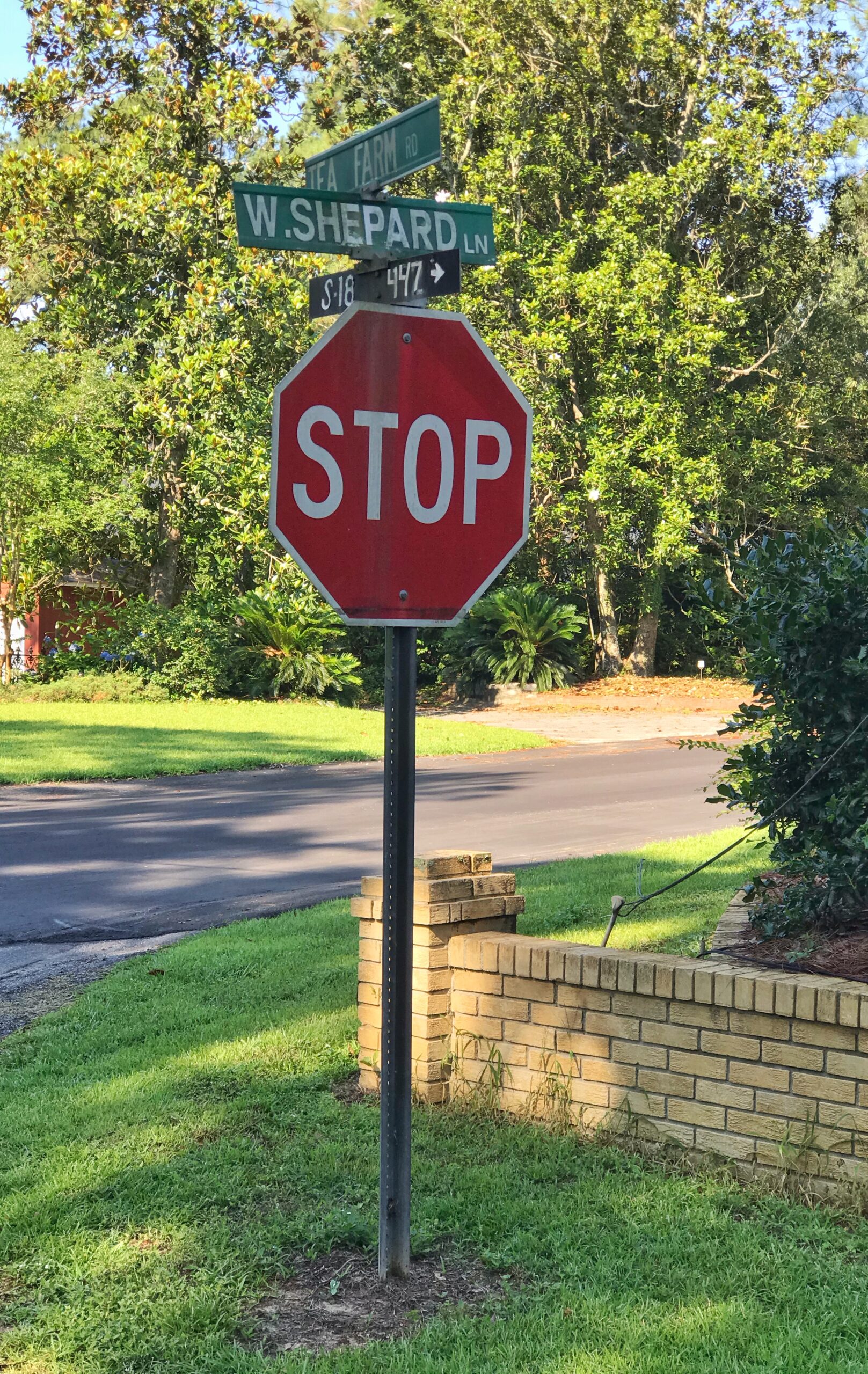 The corner of Tea Farm and Shepard

hired to oversee a new Department of Agriculture test farm for tea growing in Summerville SC, just above Charleston. That USDA farm, started in 1881, was a pet project of the then Secretary of Agriculture who wanted the United States to be less dependent on imported products. He targeted tea and sugar for domestic production due to the volume of annual imports of each. Eventually, the tea farm became a political liability for the Secretary and funding was cut off. The land and plantings were purchased in 1888 by Dr. Charles Shepard, a professor at the nearby Medical University of South Carolina. He established the Pinehurst Tea Farm and ran the operation successfully until his death in 1915.

In 1903 John Blake writes in his Tea Hints for Retailers that:

Of the several varieites of the [tea] plant under cultivation at Pinehurst those of Indian origin are the most prolific, and, from the bushes of these kind, twenty, or more, pickings are made during a season, or one about every ten days. The bushes of Chinese, Formosan and Japanese varieties permit of fewer pickings although they thrive very well and are being planted extensively.

The cost of labor to pick the tea leaves was the main impediment to successful tea production. Shepard addressed this in part by establishing a school on the farm to educate local African-American children who were then used to pick the tea leaves (and paid modestly). The first child labor laws in the United States were passed in 1916. Jim Tatum reports in the Charleston Post and Courier that in 1919 several buildings on the Farm burned prompting the Shepard heirs to sell the land. In 1955 the area was developed into a residential community that occupies the land today. Dr. Shepard’s home aslo known as Pinhurst still serves as a private family residence. It is known today as the Shepard-Seibring House at 102 W. Walker Drive, Summerville. Cuttings from tea plants from Pinehurst were moved to the current Charleston Tea Plantation when it was started. Plants grown from the cuttings form part of Field Block #1 at the Plantation. A historical marker at the current Plantation indicates that:

Because the Pinehurst plants had grown wild and cross-pollinated for decades prior to transfer they are now consider “South Carolina hybrids.”

A new venture, the American Tea Growing Company, was started just below Charleston in 1901. Blake’s Tea Hints reports that a nursery was established with seeds from China, Japan, Formosa, India and Ceylon. Seedling were set out in 1902 with plans to expand the area under cultivation.  Commercial tea production never seemed to occur. The American Tea Growing Company was dissolved in 1914 and the land sold. The land passed through several owners but was never developed. It was purchased by Charleston County in 1985. The land is now open to the public as the Caw Caw Interpretive Center. Many of the original tea plants are still growing and thriving. 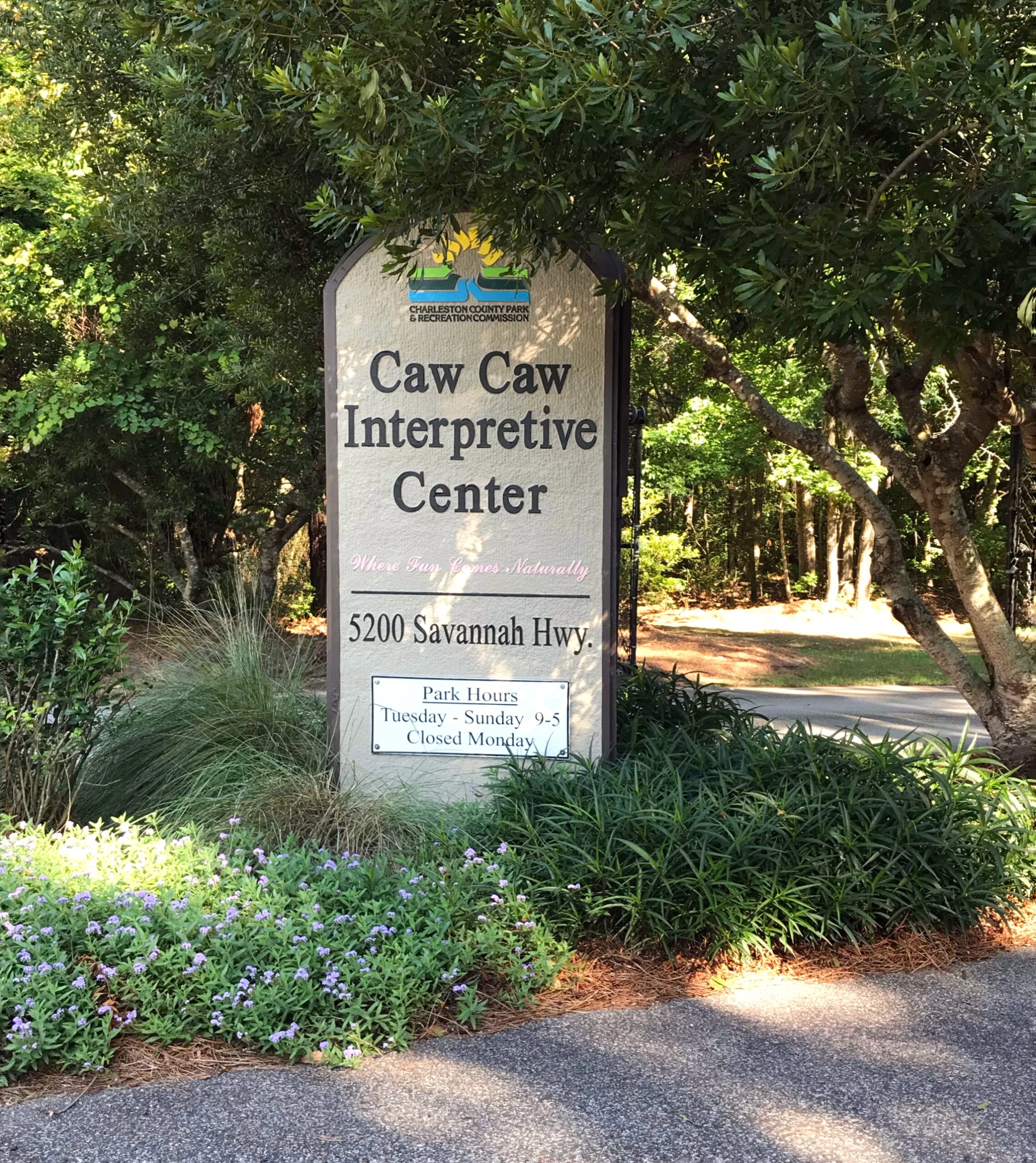 The tea plant is tough and long lived. News reports from Riceville talk about an annual event where local residents picked and made tea at the old farm for years after the land was abandoned. We have not found reports that the plants there are still present.

The pandemic has given us time to track down these locations and the opportunity to visit several of them. Golden Grove is a modest community with no obvious signs of what took place all those years ago. The Summerville site, a neighborhood of single family homes, is lush and verdant. Two street names and a historical plaque mark the site of the farm. While driving down Tea Farm Road to Shepard Lane, it is easy to picture dark green tea plants thriving among the current gardens and lawns. The Caw Caw Interpretive Center is open to the public. Walking trails lead you to the area where the tea plants still grow, incorporated into the forest around and above them. 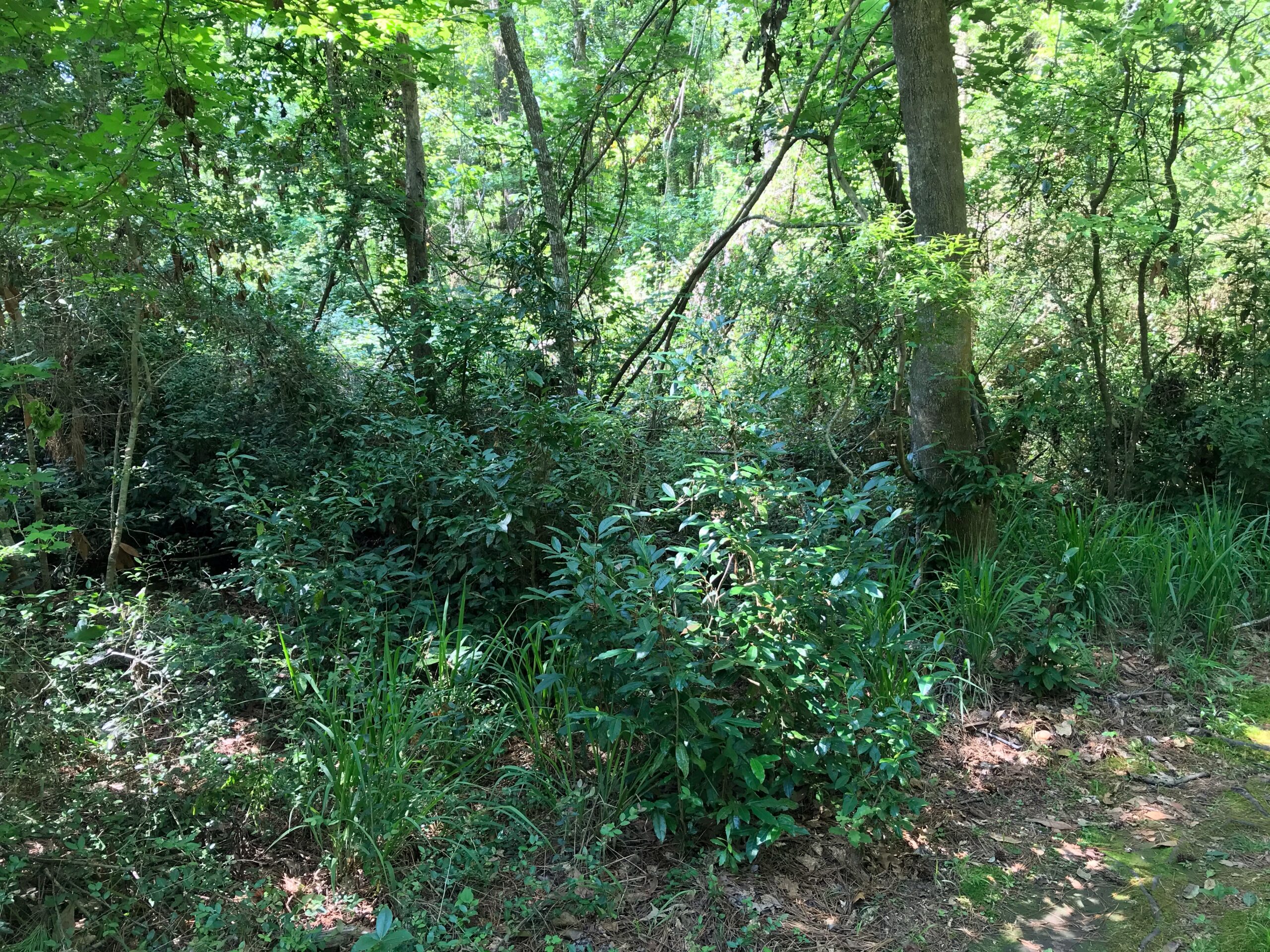 Tea plants growing in the forest understory at Caw Caw 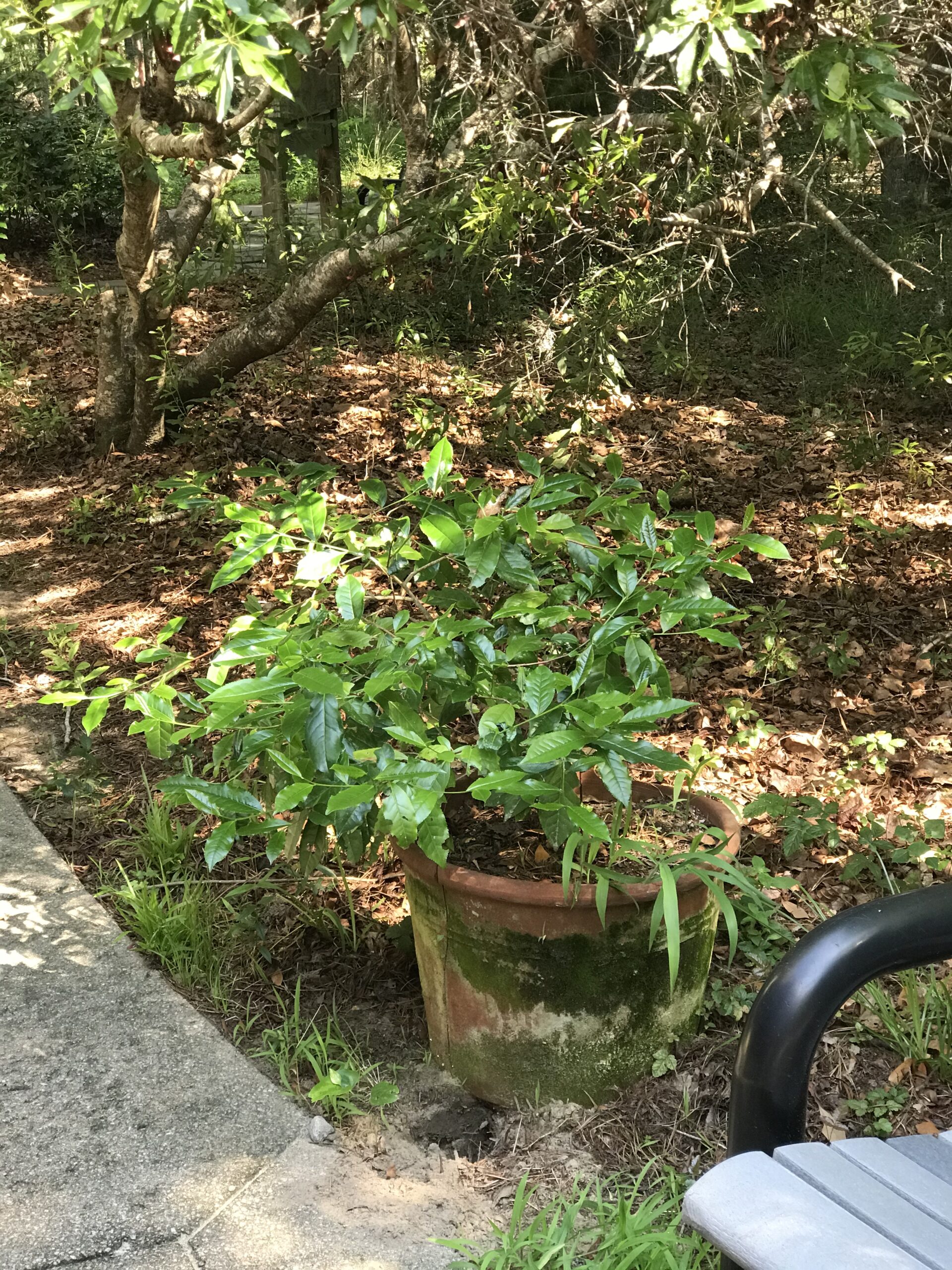 A tea plant growing in container at Caw Caw