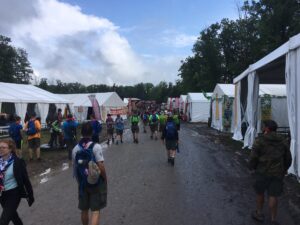 Brown Dog’s creative director has relocated to West Virginia to be part of the World Scout Jamboree this month. Quite an event. 43,000 participants from over 150 countries together for two weeks of interaction and learning about each other. Food culture is a big part of the event. Twelve countries have set up Food Houses to highlight items from their home countries. With Columbia, Italy, Brazil and Portugal (among others) present, coffee is on the menu. 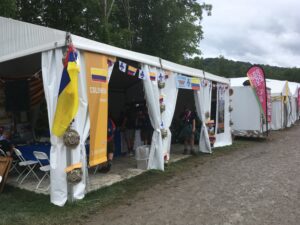 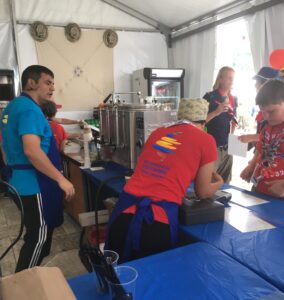 The first stop was the Columbian tent. We made it there as they were opening one morning. First task was to get the coffee going. Their set up include a large coffee urn. Columbian coffee is added to the basket and then heated water that has been sweeten with cane sugar is poured over the coffee. This gives a sweet, lighter bodied coffee that still has some depth and earthiness. Very enjoyable, even for this coffee drinker who puts the slightest bit of sugar in his coffee. We were back the next day for a second cup. 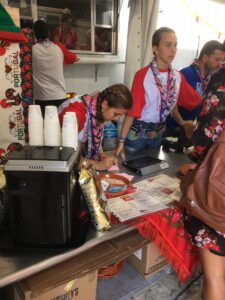 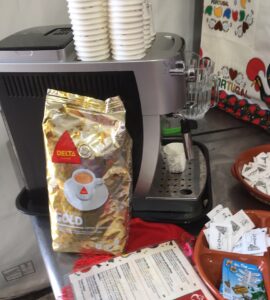 Next stop was the Portuguese tent. The coffee prep was limited to a small consumer grade expresso machine. They offer espresso, an Americano and Café au lait. Pass on the Americano. The Café au lait seemed heavy for just after lunch. A shot of espresso was in order. It hit the spot. They used a Portuguese brand of coffee – Delta. It is pre-ground and packed in foil. This was the best coffee experience so far and got the creative staff thinking that an espresso machine was needed in the home office. 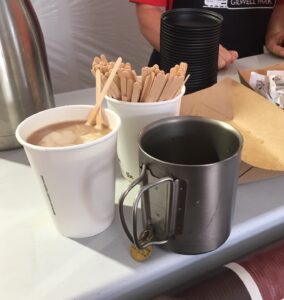 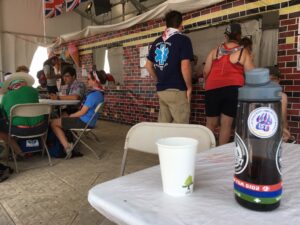 The UK tent offers tea and coffee. Getting coffee from the UK was an after th ought. The line was not long and the price was reasonable. Unfortunately the coffee was not so good. Quality was below what we are getting from the large percolator urns at our clinic locations. We are supplied with Maxwell House for the clinic machines. It has some heft. I remember reading somewhere that percolator coffee extracts the most caffeine. The UK coffee offering was thin and fairly flavorless. This was similar to what we found at a couple of coffee outlets encountered during the production of 16oz Asheville – coffee made by someone without the proper training or maybe in a hurry. Too much water for too few grounds. Ah well. 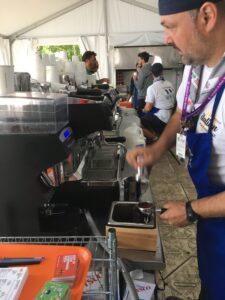 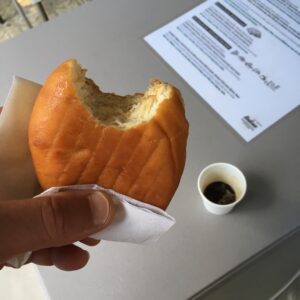 The Italian tent has a commercial grade espresso machine. Expectation were high. They did a good job although the shot volume was a little small. They did have croissant and essentially a jelly doughnut available in a package deal for $4. Good combo. A little more volume on the shot would have been nice. 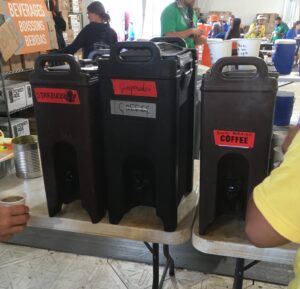 Most of the coffee getting consumed here is by the adult volunteer staff, the IST (International Staff Team). We get it with breakfast and dinner in the dining halls. It is probably Maxwell House. It is not as bad as you would think and does hit the spot early in the morning when you are getting up and going for the day. 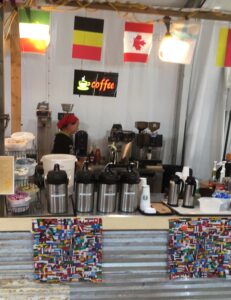 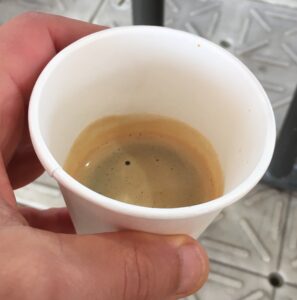 Cost of meals is covered by our registration fee. The dining hall coffee is part of that. The Chat ‘n Chew is a higher level dining experience for meals where you pay as you go. They serve Starbucks, both drip and from a coffee bar. The coffee set out this morning in the dining hall was luke warm so I got going this morning with an espresso from the Chat ‘n Chew. Good volume, not quite a flavorful as the Portuguese but enjoyable after the uphill walk from my campsite to their facility.

We talked with a couple of guys working as electricians at the event. The hooked up power to all the food houses. Apparently ther Germans had coffee equipment installed but elected not to make and serve coffee because the local water was not up to the standards.

In between coffee breaks and work responsibilities, we’ve been working away at preparing A Treatise Concerning the Properties and Effects of Coffee from 1792 for re-publication. This is an interesting work on the perception of the healthful properties of coffee as understood around the time of the American Revolution. The book contains citations in French, Latin and Italian which have been dutifully translated to English for our readers. An earlier edition of the work had been translated in to French.  The translator added a 4,000 word addendum on coffee culture in France from that same period. This addendum is off to the translator and will be included in the edition we bring out.