We have had several surprises in the garden recently – mostly pleasant, one not so much. In addition to the tea plants, we had 10 grapevines growing on the northern edge of our backyard. The area was terraced 15 years ago to cut down on erosion. That made a nice setting for grape vines. After a few years of never getting mature fruit, we kind of let it go. I used to think the wild turkeys came through and picked the green grapes off the plants. I didn’t mind the turkeys because they also cleared unwanted insects out of the vegetable garden. I haven’t seen a Japanese beetle since the turkeys showed up. The cause of the missing grapes was revealed last month. Here is the video. A mother bear and four cubs came through and stripped the vines. I assume they were not the first to visit. They are not gentle. Several of the vines 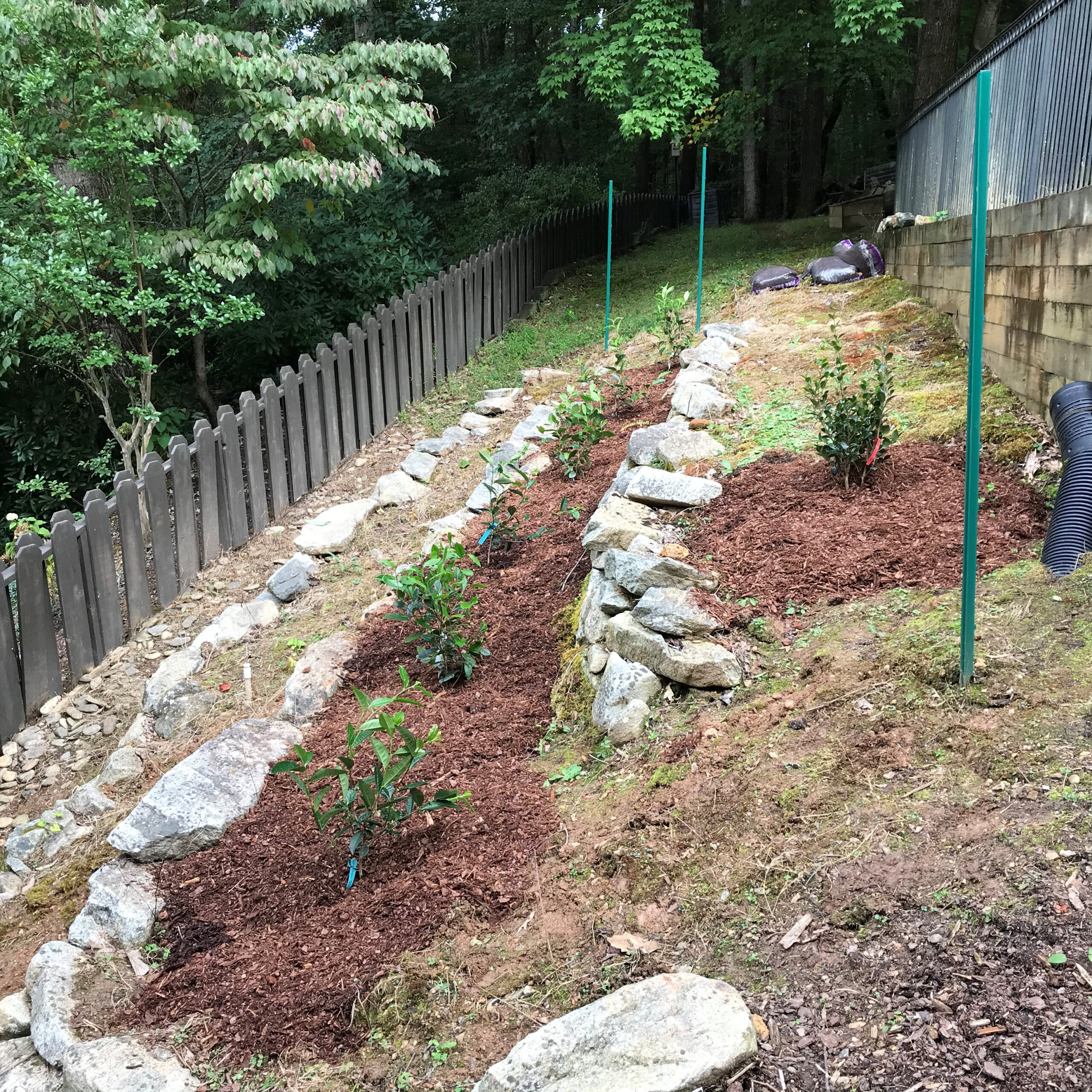 were damaged. Bears don’t forget a food source so my grape growing days are finished. I pulled up the vines and cleared out the weeds over two weekends earlier this month.

We have had bears in the yard all summer. Our first group of tea plants is set among wild blueberry bushes. The bears take the blueberries every year, but they did not seem interested in our new tea plants. I watched one stop to work on a blueberry bush then pass by the tea plants after a sniff or two. We have also seen whitetail deer in the yard for the first time in our 20 years here. Three of them stood among the tea plants and ignored them. Seems like tea is the plant for our situation.

With the vineyard area cleared, we ordered up six more plants from Camellia Forest Nursery. Those were set out this weekend. When we started our project in the spring we set out a dozen tea seeds in a small raised  bed (in addition to the tea plants). We also set seed potatoes and corn seed in the bed. About a month into the summer a vole came through the bed. I recall seeing one corn sprout, then it was gone. We assumed that was it for the other seeds. The bed was ignored over the summer. A large crop of various weeds took over. We finally got around to cleaning out the weeds last weekend. It turns out the mole ate the corn, nibbled a few potatoes but largely skipped the tea seeds. We dug up a pound or two of potatoes. Four tea seedlings were growing under the shelter of the weeds. We now have a total of seven seedlings available to set in the vineyard space next year or the year after. That will be a total of 28 plants if everything keeps growing. We should be set, with a manageable collection of plants for our ultimate goal of producing finished, locally gown tea.

While we are waiting, the plants have started to put on a show. This is our first year grow Camellis and so we did not expect the flowers that are starting to pop out on the plants. It is a treat, especially for the older plant from South Carolina. We can now say that not only did we not kill the plant by moving it, we might actually have found a decent place for it to set down new roots. The coming winter may be the first real test on how the pants are suited to our location. 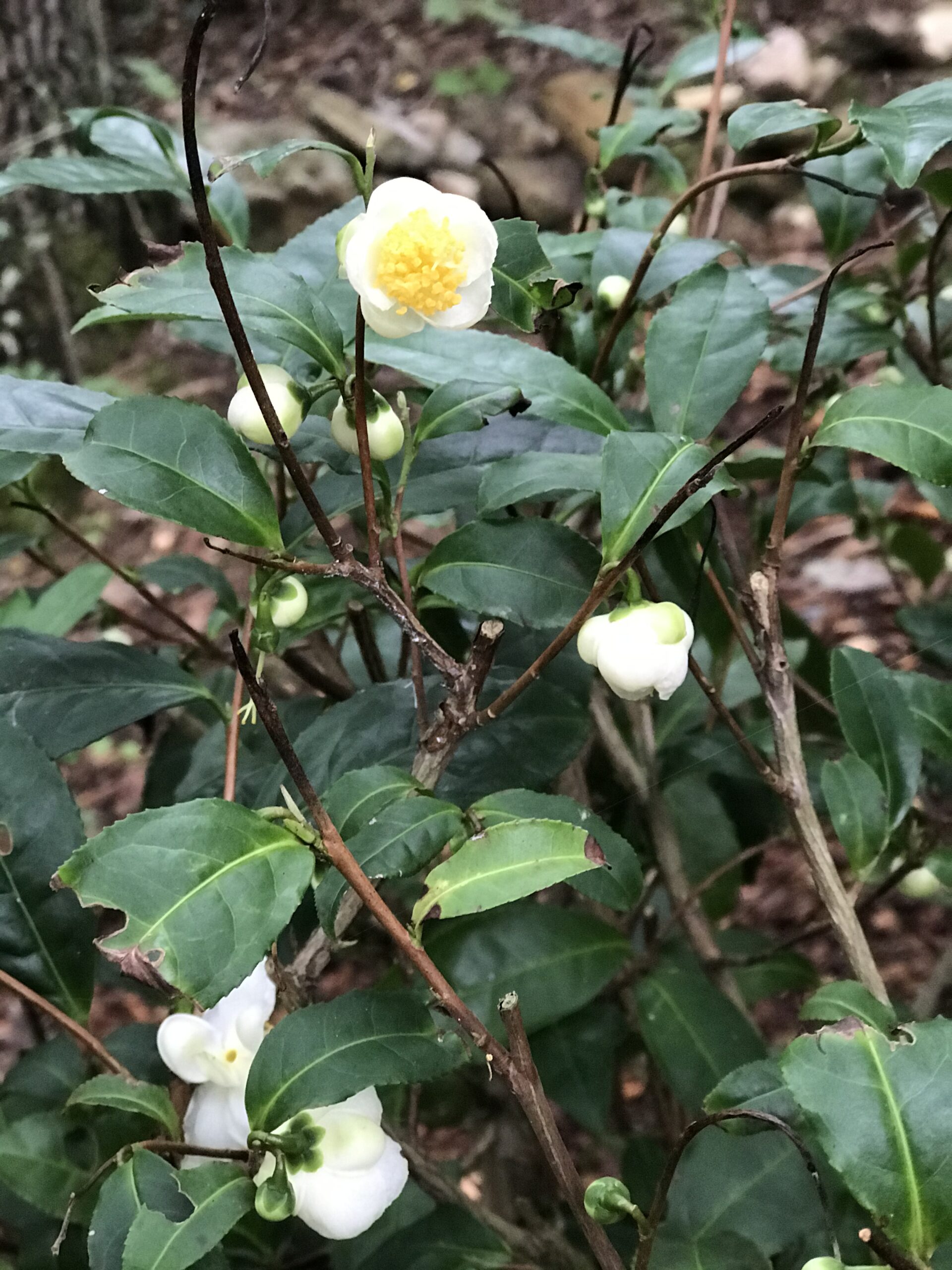 Flowers on the older plant from South Carolina 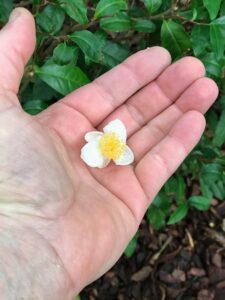